Purifying the Air with Photosynthesis Bike 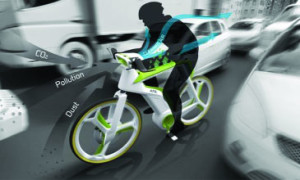 Developed by designers in Bangkok, this bike is like a two-wheeled plant, powered by your feet.
Bicycles are often cited as the most efficient modes of transportation in the world. They’re five times more efficient than walking, and 100 calories on a bike can send a person three miles. In a car, 100 calories would only take a passenger 280 feet.
What if a bike of the future could perform more than one function, earning even more efficiency brownie points? Answering that question, a group of Thai designers and engineers has developed a plan to turn the bicycle into a machine that actually cleans polluted air while cruising down the street.
The air-purifier bike currently exists only in concept, developed by Bangkok’s Lightfog Creative & Design Company. In theory, its aluminum frame would run on a “photosynthesis system” that generates oxygen through a reaction between water and electric power from a lithium-ion battery.

“We want to design products which can reduce the air pollution in the city.
So we decided to design a bike because we thought that bicycles are environmentally friendly vehicles for transportation,” explains creative director Silawat Virakul in an email to Co.Exist. “Riding a bicycle can reduce traffic jam[s] in a city. Moreover, we wanted to add more value to a bicycle by adding its ability to reduce the pollution.”
The details on precisely how the air purifier bike would work–like how often the filter and battery would need to be changed, and how much air the tool could filter at which speeds–have yet to be determined. The designers only have mock-ups, which recently won a Red Dot design award. The designers also haven’t yet built a prototype, but soon plan to.
While the air purifier bike might exist comfortably as an idea, reality could challenge the ease of operating such a fleet. There would be the question of where to charge the batteries, for one, and where byproducts, (like sugar, perhaps), might go.
Virakul acknowledges this much. Still, it’s a neat idea and less frightening than the contraption developed by Beijing inhabitant Matt Hope, who rigged an air purification helmet to his bike. We could also just wait until all city parks install electrostatic smog vacuums beneath the grass, too.