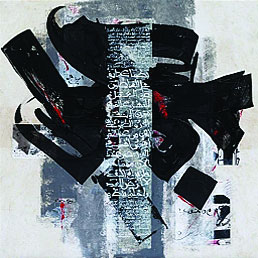 Wonder world in the heart of London is Lahd’s Gallery of Middle Eastern and Islamic art. As a world renowned and royally funded organisation, their brand new exhibition ‘Arabic Calligraphy: The Art Of the Written Word’ showcases a range of unique and modern perspectives on the ancient Arabic script.
Artists have brought their personal styles in a unique display of heritage from around the world. The art of the written word will see artwork from France, Pakistan, Malaysia, India and Oman. Artists have combined elements of graphic design, fashion and light calligraphy in a fusion of Arabic expression.Artists At The Exhibit

The exhibition will see newcomers and established creative names, including Abdallah Akar, one of the Middle East’s finest contemporary artists. Born in Tunisia, Abdallah Akar is a well known artist across Europe.
Drawn to visual art and heavily influenced from meeting Iraqi calligrapher Ghani Alani, Abdallah has a career in script. Having spent a decade in decorating textiles, canvases, wood and glass with Islamic poetry, he now teaches calligraphy at Institute du Monde Arabe.

Said Adrus is an internationally acclaimed African artist with multiple identities. Born in Kampala, East Africa, to Indian Muslim parents who migrated to Kenya before the Indian Partition, Said was ‘displaced’ to Switzerland in the 1970s, where his family still live. Said later moved to Britain to study Fine Art at university and this is the beauty that’s shown in his pieces for the Lahd Gallery exhibit. For the past 20 years Said has worked on numerous projects on Europe, New York, Havana and more recently Mumbai. In London he has exhibited the Tate Modern.

In his stunning and unique use of calligraphy, Madny has awakened the senses of his viewers. For the audience, Madny’s works present a new visual stimulation. Unlike the traditional two dimensional Arabic calligraphy in limited colours, his work is unusual in its colour palette. His distinctive style and exquisite use of colours and themes have an ethereal quality while his presentation is contemporary and elegant. Providing depth and perspective, his eye-catching works lure the senses of the connoisseurs.

Other artists exhibiting are Malaysian artist, Shukor Yahya, who revolutionised the art of the Kufi square – the oldest calligraphic form, first used in ancient religious Islamic scripts – in to a modern art. With more than 30 years of experience in graphic design, Shukor’s work mixes the traditional art of the spiritual world with that of a new modern aesthetic for all to enjoy.

An unorthodox exhibitor, Julien Breton (featured in emel magazine) is completely self-taught and unable to speak Arabic. The French artist has developed his own unique form of virtual calligraphy, based on a Latin-style alphabet and inspired by an Arabic and Eastern aesthetic. With a multi-cultural take on calligraphy, Julien’s work incorporates the cultural identity and style of East and West, fusing his ideas with inspiration from western philosophy, hip hop and street art.
Fashion Compassion at Lahd
If that wasn’t enough to make your heart beat faster, an ethical and delicious fashion house, Fashion Compassion, which supports and empowers marginalised and underprivileged women from Asia and the Middle East, will also be showcasing a range of limited edition bags and jewellery inspired by the art of calligraphy at the exhibition. {www.fashioncompassion.co.uk}

About Lahd Gallery
Founded in 2005 in Riyadh, Saudi Arabia, to create a focal point for women artists from the Gulf, Lahd Gallery soon became a well-known exhibition space on the contemporary art scene in the Middle East and has exhibited extensively throughout the Gulf and North African countries. The gallery has already exhibited controversial and provocative pieces from leading Arabic artists to great success. In 2010, Lahd Gallery moved to its present location in London and has since become the foremost gallery promoting contemporary Middle Eastern art.
The gallery is located on 92 Heath Street, London, NW3 1DP and admission to the exhibition is free. Open from Tuesday to Friday (10am–6pm) and Saturday (10–4pm), take a trip to the gallery and indulge in fusion calligraphy for yourself.