Fall of the City 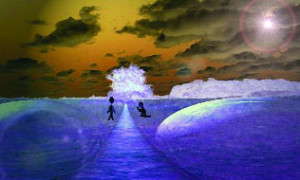 As Hevsen tied the new ladder together outside the workshop, his knot slipped on one rung, sliding over a tiny bulge in the wood. No big deal. No one who’d grown up in that city of ladders and clock towers would ever fall because of a loose rung. He finished the rest and secured it to the workshop doorway with a solid modified double hitch that wouldn’t slip in a hundred years. Then he climbed down to his waiting spider, fired up the engine, and drove down the city’s webs to enjoy the evening.
Six months later, his uncle Shaln was climbing with a box of bolts and gears and other hardware balanced in his arms. When the rung slipped, he lost control of the box, only righting it after a single nut had slid out the box’s handle and fallen into the city below. Shaln himself had been in no danger. He quickly forgot the episode as he brought the hardware inside and set to work on his latest commission, a palm-sized butterfly that beat its wings in time to the ticking of the second hand in its tiny clock.
The nut dropped into the engine of a spider. There it rested for days. The driver, one Beeshenai, followed his usual commute from his home out on the outer edges of the city to his work in the center, where the webs converged into a knot of spider traffic. When Beeshenai was rushing to work one day and stuck on a slow-moving web, he chose to make a jolting jump across a wide gap to another web. Mid-leap, the nut slipped down into the leg gears, and one leg, which should have lightly grabbed the new web, instead tore forcefully through several strands before catching. Beezhanai noticed the jerky landing, but didn’t realize its cause. He sped away toward the next jump.
Over the course of that day, the web unraveled. The tear had undone a key link in the structure. By evening the entire web was useless. Traffic routed around to other webs, and the locals had to use a maze of ladders to get to their homes.
When young Aishen, daughter of a powerful clock magnate, grew sick, the emergency spiders failed to reach her house because of the broken web. By the time the family managed to carry her down the ladders to the waiting vehicles, she was very ill, a poison of some sort spreading rapidly through her blood. She spent the next week asleep in a hospital bed, her father by her side.
And because the clock magnate couldn’t be at work, the clockwork constructs ordered by the city did not get delivered when they should have. The machines were complete, their predatory eyes alert, their stinging blades sharp and well-oiled, but they remained in the factory deep within the city.
The city was vulnerable at just the wrong time. Hoards of tick-tocks swarmed down the webs from above, no constructs there to stop them.
Hevsen, like the thousands of young men his age, rushed to the city edge, flush with civic pride, full of the sense that at last there was a chance for them to make a difference in the city. By that point, no one fighter could have any affect against the army they faced. When they fell, their bodies fell literally, down past webs and ladders, clock towers, perched houses, and the mechanical spiders awaiting their owners’ return.
The city fell, and no one remembers exactly where those ladders and clock towers once were. But there is a village far away, a village of flat streets and single-story houses where every ladder is made with one rung loose, as a warning and a commemoration.