The making of Guantánamo Bay: The Hunger Strikes 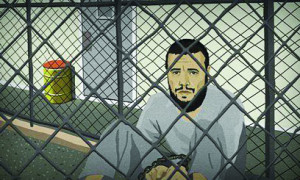 For Sami al-Hajj, the scenes in the film he is watching at his home in Doha, Qatar, take him back to his darkest hours. Twice a day, for 16 months, al-Hajj was strapped down and force-fed inside Guantánamo Bay. Today, viewing a film representation of the procedure in Guantánamo Bay: The Hunger Strikes – an animated short made by two British journalists – induces a familiar sensation of torment.
“It reminds me of the painful suffering during my hunger strike. It was painful in every sense of the word. I felt at the time that I died twice every day during the force-feeding,” says the 44-year-old from Sudan. A former al-Jazeera cameraman, al-Hajj was illegally detained and tortured by the US authorities for seven years inside Guantánamo Bay, before being released without charge in 2008.
More than five years later, the mystery of what goes on beyond the watchtowers and barbed-wire perimeter of the world’s best known, most controversial and most expensive prison, has if anything deepened. What exactly is daily life like inside Guantánamo Bay? How does it feel, smell, sound? What do its detainees do all day? What do they think? How do they cope?
Apart from the odd photograph, usually shot under tightly controlled conditions, practically nothing exists that gives us a picture of contemporary life inside the prison in Cuba; certainly there are no films, no documentaries, no on-camera interviews recording conditions within its zealously guarded walls. It’s telling that the best known image associated with the camp remains that of detainees shackled in orange boiler suits, a picture taken in 2002 in a part of the camp that no longer exists. Actual information from within Guantánamo Bay is similarly scarce. When last March reports of hunger strikes began to surface, details as always were sketchy and contradicted by statements from the US military.
The main source of the reports was Clive Stafford Smith, director and founder of legal assistance charity Reprieve, who, having heard that inmates were on hunger strike as a protest against their conditions, had started regularly visiting his Guantánamo-based clients in an attempt to ascertain what was going on. Stafford Smith was only allowed to meet a detainee once the prisoner had agreed to body cavity searches. Interviews took place under tightly regulated conditions and Stafford Smith was prohibited from recording a word. Only when outside could the lawyer scribble down conversations with inmates. This circumscribed method of accumulation of evidence was, even by the arbitrary standards associated with the US administration’s “war on terror”, eccentric.
“Detainees are effectively censored,” says Cori Crider, a lawyer at Reprieve who has also made visits to the prison. “Everything they say to me on the telephone is listened to – and interrupted if the authorities hear anything they don’t like. Everything they write to me passes through a government censor. And you can’t interview – you can only ever use testimony through this filtered material.”
As the hunger strike escalated, Stafford Smith returned to London and on 17 April met the Observer at Waterloo Station to hand over caches of material – transcripts of conversations with detainees, including one from his meeting with the last British resident still inside the camp, Shaker Aamer. Aamer’s poignant description of his plight struck a chord with many when it was published in the Observer the following Sunday, among them Mustafa Khalili, the Guardian’s multimedia news editor, and his colleague the video producer Guy Grandjean. Both had long been eager to document the controversies of Guantánamo but recognised that it was virtually impossible to film anything worthwhile. Yet Stafford Smith’s transcripts were so evocative, so human, so powerful…
“We had these heart-rending words describing the goings-on inside Guantánamo but no visuals,” says Khalili. “The big conundrum was: how do we do this?”
“And then we thought let’s do an animation,” says Grandjean.
The pair approached Sherbet, an independent production company with which they had worked last year to create a widely acclaimed animation chronicling an Iranian lawyer’s bid to save juveniles from execution. Sherbert’s executive director, Jonathan Bairstow, immediately recognised animation’s potential to shine a light on this murky, secretive domain. “The medium can be used in interesting ways,” he says, “when it is used with integrity and sensitivity.”
Meanwhile, pages and pages of fresh testimonies were pouring in via Reprieve as the hunger strikes continued. By June news of the protest was gaining traction. Initial denials by the military that a hunger strike was even happening had given way to the admission that of the 166 detainees, 104 were on hunger strike and 44 were being force-fed.
(Shortened)