The Magnetism of the Ka’ba 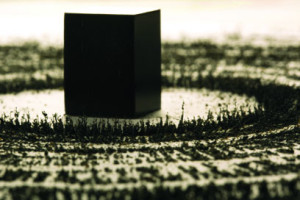 The cube: a primary building block, the simplicity of which reflects the essence of Islam. Here are some art from around the world, depicting the magnificent beauty of the Ka’ba.

“The Magnestism exhibition uses physics, magnets, and iron fillings. We see the strength of magnetic attraction, which forms the movement of the tawaf around the Ka’ba. Personally, this is the spiritual state that I find myself in when I myself am making the tawaf.”
‘I know I am not alone’, Samir Malik

“Stuck in a Calcutta hotel room during monsoon season, I observed the tawaf on television; the sight of over a million people, all dressed the same and moving in one direction showed me that unity was a real possibility in the world. Since then, I find myself painting the Ka’ba every year. The title for this particular piece expresses how much Hajj has taught me personally.”

“I intended for the piece to be a simple view, of an amazing reality. It is the primordial symbol of the central still point within a circle. Like the nucleus within the cell, every person’s being resonates with this as it is what we are all made from – the macrocosm, revealing itself within the microcosm.”

“The Ka’ba to me has so much energy; I find inspiration in the mass rush of people circling the black cube, the striking gold of the visuals and the piercing minarets. My focus is capturing the frenetic scene, reflecting the realisation of my own constant inner battles. The layered paint highlights layered complexities, with sharp reds against softer blues. ”

“Beneath the complex surface and layers of time, the simplicity of the cube in Hajj is what inspired me; the fixed nature of the square as a focus and the fluid, continuous circle of tawaf is mesmerising. Just as the electrons in an atom are attracted to the nucleus, so too are we drawn to the Absolute. The piece was particularly personal as I used items I found during my own experience of Hajj in the art work.”

‘3D Shahada Ka’ba’ & ‘House of God’, Ruh al-’Alam
“The Ka’ba to me is sublime. The fact that God chose the simplest of shapes to represent His house on earth is truly magnificent. It is a symbol of focus; an angular structure that has its four corners facing towards the four points of the earth.
Every Muslim artist who seeks to create art that is reflective of their faith will aways come to do a piece on the Ka’ba as it is the closest an artist gets to depicting the most Divine.”

‘Stencil Art’, photo by Ted Swedenburg
“This sort of stencil art is not ‘graffiti’, but appears to be sancrioned art work that one typically finds on walls next to the entrances of mosques throughout the Old City of Jerusalem.”

‘Talisman X-Ray’, Ahmed Mater
“This particular image is from a series, which depicts a torso with the Ka’ba in place of the human heart. In this work, I utilised my own experience and I incorporated my religious heritage as represented by the Ka’ba – a simple self-expression drawn from daily life.”
‘Seven Times’, Idris Khan
“Consisting of 144 oil-sealed steel cubes, the installation is arranged in a grid that replicates the dimension of the footprint of the Ka’ba. Each cube is sandblasted to inscribe the daily prayers that Muslims recite every day. The fragments of the prayer which bisect each cube have been repeated and superimposed five times. Through this technique, what remains is a soft, poetic mark made through a process of aggressive removal of surface.
From what I’ve observed, the Ka’ba is never not being circled by pilgrims. There is a constant flow of humanity walking around this black box. It is bellieved that if this stops, then the world ends – just as if the planets stopped orbitting the sun.”    Source: emel magazine