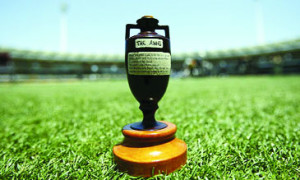 The Ashes Begins in November
The 2013–14 Ashes series is a forthcoming series of Test cricket matches to be contested between England and Australia. The Ashes 2013-14 cricket Tournament will start on Nov 21, 2013 in Australia. The last match of the tournament will be held on Jan 7, 2014. The five venues for the series will be The Gabba, the Adelaide Oval, the WACA Ground, the Melbourne Cricket Ground and the Sydney Cricket Ground.
The term (Ashes) originated in a satirical obituary published in a British newspaper, The Sporting Times, immediately after Australia’s 1882 victory at The Oval, their first Test win on English soil. The obituary stated that English cricket had died, and the body will be cremated and the ashes taken to Australia. The mythical ashes immediately became associated with the 1882–83 series played in Australia, before which the English captain Ivo Bligh had vowed to “regain those ashes”. The English media therefore dubbed the tour the quest to regain the Ashes. Since then it is known as the Ashes series.
The Ashes is also one of the most popular rivalries to exist in cricket. It is a cricket series at its purest form. The series comprises of five test matches hosted by either of the two countries. The series is held once every two years. The Ashes have been in existence since the year of 1882. The Ashes has always been dominated by the Australians so expectation from cricketing fan of Australia would higher this time too. The Ashes is considered as a series of prestige and reputation among these two countries so it is expected to get the best from both this teams before the Cricket world cup.
The rules of the games of this tournament are no different from that of the regular test matches. If there is a draw in the series, the trophy is retained by the team that is already holding the championship. Currently, the championship of the test series belongs to England. Although the trophy is at the moment with the English team, it is Australia who has been more successful between the two teams. The Australians have won 133 test matches in the Ashes. Sir Donald Bradman has the highest number of runs while Shane Warne has taken the highest number wickets in the Ashes.

There have been as many as 327 matches played in this series. Out of these matches, England has won 102 while the Australians have won 133 matches. The rest have been drawn. The year of 1938 saw the highest totals. The English team reached a massive score of 903 for the loss of seven wickets. The second highest score was recorded in 1930 when the Australians scored 729 for the loss of six wickets. Bradman is the leading run getter in the Ashes with five thousand and twenty runs. Jack Hobbs of England comes second with three thousand six hundred and thirty six runs. Highest number of centuries is in the name of Bradman as well, with as many as nineteen centuries in the Ashes.
Farewell for Tendulkar:
The living legend of cricket, the most successful cricketer of the century Sachin Tendulkar is retiring this November from Test cricket (He has already retired from ODI and T20 cricket). This will draw the end of his glowing career of more than 20 years of cricket. There is a huge demand for tickets from fans across the world. People from all the Test playing countries as well as America are demanding tickets to watch Sachin Tendulkar’s 200th and farewell Test at the Wankhede Stadium in Mumbai against West Indies. The match is scheduled from November 14 to 18.  The Mumbai Cricket Association (MCA) has decided to give Tendulkar 500 tickets. The Bollywood actor and owner of Kolkata Knight Riders, Shah Rukh Khan is not allowed for the match. He was banned by MCA for five years from entering the Wankhede Stadium for creating a ruckus during an IPL game in 2012 by the previous regime.

Sachin Tendulkar in numbers
Test matches (198): He has scored 15,837 runs at an average of 53.86, hitting 51 tons and 67 half centuries. His top score was an unbeaten 248 against Bangladesh in Dhaka in December 2004
One-day internationals (463): He has scored 18,426 runs at an average of 44.83 and a strike rate of 86.23. He has scored 49 centuries (highest score 200) and 96 fifties
Twenty20 internationals: He only made one international appearance in the shortest form of the game, scoring 12 from 15 balls against South Africa in December 2006
Bangladesh Draws the Test series with gain:
The result of second test ensured the two teams shared the honors in the series after the first Test in Chittagong also ended in a draw. The second Test between Bangladesh and New Zealand ended in a draw after rain washed out the fifth and final day’s play at the Sher-e-Bangla National Stadium on Friday, 25th October.? By the end of Fourth day, Bangladesh were on 269-3 in their second innings, leading New Zealand by 114 runs.?Left-handed middle-order batsman Mominul Haque remained unbeaten on 126 alongside former captain Sakib al Hasan on 32 not out.
Mominul, who also made 181 runs in the first innings of the first Test and aggregated 376 runs in the series, was named both man of the match and man of the series. ?A number of other Bangladesh players also produced standout performances during the two-match series. Tamim had scores of 46, 95 and 70, while all-rounder Sakib scored a 50 in the first match and hauled in a five-for in the second.
Sohag Gazi was the man of the match in the first Test after becoming the first player in Test history to score a hundred and take a hat-trick in the same match. He also became the second Bangladeshi – after Sakib – to score a century and take a five-for in the same match, finishing with six wickets in the second innings.
With the series result, Bangladesh gains eight points in the ICC Test rankings and New Zealand drops four, though the changes do not alter their positions. The teams remain in 10th and 8th respectively.

Mominunl and Sohag sing in record book
Sohag Gazi (born 5 August 1991, Barisal) made his Test debut in first test during West Indies’s tour of Bangladesh in 2012, taking six wickets in the second innings. All rounder Sohag Gazi depicted his name in a unique world record of scoring hundred and taking 5 wickets with a hat trick. He is the first and so far, to do it twice-in First Class matches. Sohag became the only player to make this record in 136 years history of test cricket. Earlier Sohag scored 101 runs in the first innings of the Tigers. It is the second hat trick done by any Bangladeshi bowler. Alok Kapali made the first hat trick against Pakistan against Peshawar in 2003. Sohag Gazi is the 37th bowler to make 40th hat trick in test cricket history
Five feet, five inches, a left-handed batsman and an occasional left-arm spinner, Mominul Haque made his first-class debut for the Dhaka Division back in 2008 and the following year, emerged as the leading run-scorer against Zimbabwe Under-19 in five matches in 2009. The youngster was called-up to the national squad in 2012 for their ODI series against the West Indies, where he replaced his favorite cricketer, the injured Shakib Al Hasan. Since then, he has been rising star in Bangladesh cricket , specially in the middle order vacuum. His back to back test century against New Zealand not only earned him Man of the match, but also Man of the series. He earned his name in some record statistics:

Golf: A rising sports in Bangladesh

Golf is one of the most popular sports in the international stage. Yet, Bangladesh is quiet new into this arena that yet to be explored. In Bangladesh we have 12 Golf courses (mostly controlled and run by army) that offers very cheap 18 holes game (300-400 TK). While same is cost (2000-24000 TK) in other rich countries. Hitherto, many people don’t have the information and available access to this privileged sports.
Golf is one of the few ball games that does not require a standardized playing area. Instead, the game is played on a golf course, generally consisting of an arranged progression of either 9 or 18 “holes.” Each hole on the course must contain a “tee box” to start from, and a “putting green” containing the actual hole. There are various other standardized forms of terrain in between, such as the fairway, rough, and hazards, but each hole on a course, and indeed among virtually all courses, is unique in its specific layout and arrangement. Golf is a precision club and ball sport in which competing players (or golfers) use many types of clubs to hit balls into a series of holes on a course using the fewest number of strokes. The modern game of golf originated in 15th century Scotland.
It was in 1999 when former ball boy Siddikur walked the path towards the dawning of a new era for golf in Bangladesh. The son of an odd-job worker, Siddikur traded a life as a ball boy to represent the newly revamped Bangladesh National Amateur. Prior to his inclusion, the national squad comprised of elderly club members who represented the country in international tournaments with very little success. Siddikur’s introduction into the world of golf kicked off instantly as he dominated the amateur circuits, winning regularly in championships held in South Asia. With his trophies pilling up, the Bangladesh Golf Federation sent him to a three-month stint at a golf academy in Australia. He was the first Bangladeshi to earn his Asian Tour card through the rigorous Qualifying School. Throng of fans gathers to watch Siddikur, who they aptly nicknamed the “Tiger Woods of Bangladesh”.