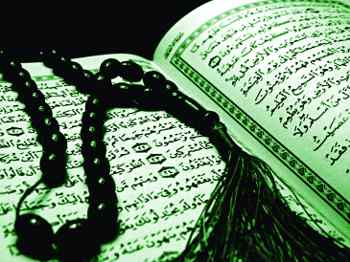 We leave the blessed month of Ramadan, its beautiful days and its fragrant nights. We leave the month of the Qur’an, Taqwa, patience, jihad, mercy, forgiveness and freedom from hellfire…

Have we fulfilled the requirements of Taqwa and graduated from the Ramadan school with the diploma of the god-fearing?

Have we fought our souls and desires and defeated them, or have we been overtaken by our customs and blind imitations?

Have we performed our actions in a way that fulfills the conditions for receiving mercy, forgiveness and release from the Fire?

Many questions and numerous thoughts come to the heart of the sincere Muslim, who asks and answers with truthfulness.

What Have We Gained From Ramadan?

Ramadan is a school of Iman (faith) and a ‘stop to recharge one’s spiritual batteries’ – to acquire one’s provision for the rest of the year…
For when will one take a lesson and change for better if not in the month of Ramadan?

The noble month is a true school of transformation in which we change our actions, habits and manners that are in variance with the Law of Allah. {Verily, Allah does not change the condition of a people until they change what is in themselves}. [Ar-Ra`d: 11]
If you are from those who benefited from Ramadan, fulfilled the requirements of Taqwa, truly fasted the month, prayed in it with truthfulness, and strove against your soul, then praise and thank Allah, and ask Him for steadfastness upon it until you meet your death. 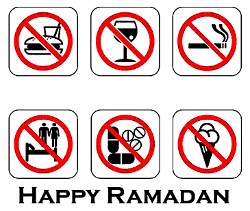 This is the condition of one who returns to sinning and evildoing after Ramadan and leaves obedience and righteous actions. So after he was favored with the blessing of obedience and enjoyment of communicating with Allah he returned to the blaze of sins and evil actions. How evil are the people who know Allah only in Ramadan!

Falling short in one’s commitment to Islam after Ramadan is manifested in many ways, including:

1. Men leaving the five prayers in congregation, after they filled mosques for Taraweeh prayers, thus going to the Masjid for recommended prayers and leaving obligatory ones.

This is not thankfulness for blessings and favors, nor is it the sign of acceptance of one’s actions; rather this is opposition to favors and absence of thankfulness.

These are from signs of one’s deeds not being accepted – and Allah’s refuge is sought – for one who truly fasts, rejoices on the occasion of `Eid, praises his Lord for helping him complete the fast, and remains fearful that Allah may not accept his fasting, just as the early Muslims would continue asking for acceptance of their actions in Ramadan for six months after it.

From signs that one’s deeds are accepted is that he or she has improved in his or her obedience to Allah. {And remember when your Lord proclaimed, ‘If you are grateful, I will surely increase you [in favor]…}. [Ibrahim: 7] Increase you in good, faith and righteous actions. So if the servant is truly thankful to his Lord, you will see him guided to more obedience and distanced from sinfulness. Thankfulness is leaving sins, as the early Muslims said.

{And worship your Lord until there comes you to the certainty [i.e. death]}. [Al-Hijr: 99]

The Muslim must continuously be in the state of obedience of Allah, firm upon His Shari`ah, steadfast upon His Deen, so that he or she is not of those who worship Allah only during one month or only in one place. Rather, the believer knows that the Lord of Ramadan is also the Lord of other months, and that He is the Lord of all times and places, so he is steadfast upon the Shari`ah of Allah until he meets Him while He is pleased with him. Allah Ta`ala said, {So remain on a right course as you have been commanded, [you] and those who have turned back with you [to Allah]}. [Hud: 112] And, {So take a straight course to Him and seek His forgiveness}. [Fussilat: 6] And the Prophet, peace and blessings be upon him, said, “Say ‘I believe in Allah’, then be steadfast.” [Sahih Muslim]

If the fasting in Ramadan has ended, then there remains voluntary fasting, such as fasting six days in Shawwal, on Mondays and Thursdays, the three days in the middle of the month, the days of `Ashura’ and `Arafat, and others.

If standing in prayer at night during Ramadan has ended, then there remains voluntary night prayer throughout the year. {They used to sleep but little of the night}. [Adh-Dhariyat: 17]

If the charity in Ramadan and Zakat-ul-Fitr have ended, then there is the obligatory Zakat, and also there are many other open doors to charity, voluntary actions and Jihad. 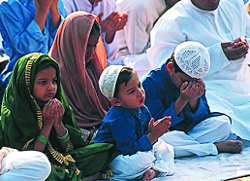 Reading of the Qur’an and contemplating it is not only for Ramadan, rather it is for all times.

Righteous actions are for all times and all places, so strive – O my brother and sister – and beware of laziness. And remember that it is not allowed for us to leave the obligatory actions or delay them, such as the five daily prayers on time, in congregation etc.

And do not fall into forbidden actions, such as forbidden sayings, food and drinks, or by looking at or listening to what is forbidden.

Be steadfast and upright upon the Deen of Allah at all times, for you do not know when you’ll meet the Angel of Death. Beware of him taking you while you are in a state of sin. “O Allah, Who turns the hearts, keep our hearts steadfast upon Your Deen.”

I ask Allah to accept from us and you our fasting, our prayers and other righteous actions, that our condition after Ramadan be a better one, that the state of our Ummah improves, that we are granted honor and that we truly turn to our Lord…Amen.