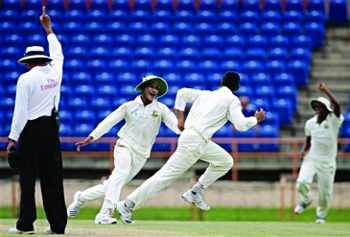 Bangladesh enjoyed the unprecedented experience of winning not only but two back to back away cricket series by the magnificent Bangladesh cricket team at West Indies and Zimbabwe. It was indeed the finest moment in Bangladesh sports history. The achievement presented Bangladesh a new image in the international scenario and showed that the country is making rapid strides in the cricket world.

Bangladesh recorded a clean sweep victory over West Indies in both Test and one-day series before trouncing Zimbabwe 4-1 in the one-day series during the 53-day long tour.

Prime Minister Sheikh Hasina declared a cash award of Tk 3 lakh for each member of the triumphant Bangladesh cricket team who recently clinched Test and one-day international series wins in a row against West Indies and Zimbabwe. Bangladesh Cricket Board will also distribute a purse of Tk. 1.5 crore among the players as promised incentive.

Sakib al Hasan, the in-form skipper, however, was modest about the achievements. ‘We did not imagine such a result, but our

confidence was high and we were determined to put up a good show, we got the opportunity and excelled,’ said the skipper.
‘The credit goes to all members of the team, who showed a splendid teamwork, our only target was to play good cricket and the consequence is success, these results will motivate us to play good cricket,’ said Sakib.

Opener Tamim Iqbal became emotional in such an atmosphere. ‘I have always dreamt of such a situation. I personally believed that I could perform and I did it, when an opener lays the foundation a win becomes easy for the team, I would like to continue playing long innings as much as I can,’ said the left-handed hard hitter.

Mohammad Ashraful termed the success as the proof of their improvement. ‘After the debacle at the T20 World Cup we were devastated. From the very beginning of the tour we were determined that we will mark our presence and we did it, a number of centuries were scored, the bowlers bowled well, we stamped our authority like never before,’ said Ashraful.

Mushfiqur Rahim said the successes came as a result of the hard work. ‘We have been working hard for the last six months, the most important thing on the tour was that we played with consistency,’ said the wicketkeeper. 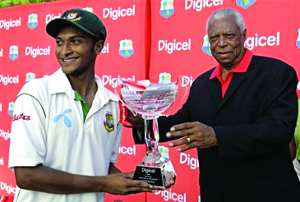 The quality of opposition for Bangladesh in the West Indies has meant that much of the gloss has been taken off their Test and one-day series triumphs, but none can question the class of the player who led them in most of those wins. For years Bangladesh have yearned for a batsman who can score as many runs as his talent suggests he should, and can mix it with the best. Shakib Al Hasan has shown he can do that, and keep his head when things get tight. Add that to his excellent control as a left-arm spinner and a temperament that craves responsibility instead of shunning it, and Bangladesh have an absolute asset on their hands.

When Mashrafe Mortaza, the original captain on their tour to the West Indies, injured himself early in the first Test, Bangladesh’s campaign could have gone wrong, even against a weakened opposition. However, Shakib stepped up to the challenge superbly, scoring an undefeated 96 in a difficult run-chase after the team had lost early wickets. Shakib finished the Test series with a batting average of 53 and a bowling average of 18 for his 13 wickets, and was easily the most influential player from either team. The good thing for Bangladesh is, it doesn’t appear as if this effort was a flash in the pan.

A Test hundred is still missing from his resumé, but in his last seven innings Shakib has two scores of 96, one of which was an unbeaten knock. His bowling stats are very respectable too, with a mean of almost three-and-a-half wickets per Test, and an average that is less than his batting one.

His ODI numbers are equally impressive, with a batting average of 34 and a bowling average of 30. And it isn’t as if he has feasted on the weaker teams either – he averages more than 35 with the bat against Pakistan, Sri Lanka and India.

Shakib has only played 14 Tests, but his numbers are already among Bangladesh’s best with both bat and ball. Among Bangladesh batsmen with at least 500 Test runs, only Habibul Bashar has a higher average, and even there the difference is marginal. For all his undoubted batting talent, Mohammad Ashraful doesn’t even figure in the top five, with an average of 23.10.

A feature of Shakib’s career has been his consistency: in 26 Test innings, 13 times he has scored 25 or more (50% of his innings). The corresponding percentage for Bashar is 41, and for Ashraful a poor 28%.

The story is similar in ODIs: Shakib’s record is the best among Bangladesh batsmen who’ve scored 1000 or more 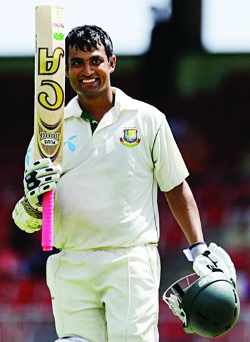 When Shakib began his Test career, his left-arm spin wasn’t much of a threat – in his first six Tests he only took three wickets, each costing him 104.67 runs and requiring 218 deliveries. Since then, though, his numbers are almost unrecognisable: in his last eight games, he has taken an incredible 45 wickets at 23.17 apiece. During this period he has taken five wickets in an innings on five occasions. That’s pulled his overall average down to an excellent 28.27, easily the best among Bangladesh bowlers who’ve taken at least 20 Test wickets.