Youth is the prime age in the life of a person. It is a time when health, vitality, spirit and passion all are at their optimal and a person feels he or she can do everything and whatever they undertake in life they could achieve it. This adrenaline flow and feeling of strength is the best of youth, however, if both these factors are not controlled, this can lead to a person going down the path of ignorance and evil.
Islam recognizes the importance and pivotal nature of the time of youth in the life of a person; therefore, it encourages its followers to spend this time of their life in doing good. The reward for doing good in the time of youth will definitely be more than what a person does in later age when there is nothing else left to do.
The lines below discuss some approaches with references of Quran that can help young Muslims to be more productive and rewarding:

1.
Ups And Downs Are A Part Of Life:
One of the most common trait that is observed in the young people of contemporary age as well as the young people of earlier ages as well is the complaining. A person in youth is enthusiastic and full of passion, therefore, when something does not go as the youth expects, it is quite natural that a person would get frustrated or angry and start complaining about the hardships and difficulties in life. A Muslim must realize that hardships are as an important part of life as is the ease that comes in life. As Allah says in Quran:
“…..And We test you with evil and with good as trial; and to Us you will be returned.” (21:35)
Therefore, a Muslim youth should refrain from complaining, bear the hardships with patience, and be thankful to Allah in the good times.

2.
Quran Is The Guidance:
Another thing that a Muslim can do in his or her youth to make sure that the time is more rewarding and better utilized is to consult Quran for guidance. In addition to the fact that Quran Learning results in religious reward, Quran is also a doctrine that guides the youth in terms of the way they should spend their life. Thus, the more a youth consults Quran and the more he or she applies the commendations and instructions of Quran in life, the chances spending the youth on the path of righteousness increase exponentially. As Allah says in Quran:
“This is the Book whereof there is no doubt, a guidance to those who are Al-Muttaqun (the pious and righteous persons who fear Allah).” (2:2) 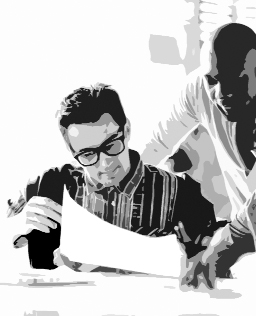 3.
Follow The Sunnah:
For a Muslim the life of Prophet Muhammad (PBUH) is the best example of all, and if a Muslim is to follow a particular personality, then there would be none who is better and more perfect than the personality of Muhammad (PBUH). In addition to observing the way Prophet (PBUH) spent His life in general, a Muslim must also consider the way He spent His youth in particular. Following His life is the salvation and the ideal that a a Muslim ought to pursue in life in general and during youth in particular. Allah Almighty also says about following his personality in the following way:
“Say if you love Allah, then follow me: Allah will love you and forgive your sins. Verily, Allah is Forgiving and Merciful.” (3:31)
Therefore, following Prophet (PBUH) is a way of expressing the love for Allah, hence every Muslim in his or her youth must try to follow the Sunnah as much as possible.

4.
Be In The Company Of Good People:
A man is known by the company he keeps. During youth a person meets all sorts of people and tries all sorts of things. A Muslim in youth must realize that for a Muslim this world is  not the final world, therefore, youth is not to be destroyed by following the desires of this world, rather, in youth one needs to control one’s toxic inclinations and one way of doing so is by staying away from the company of people who are involved in evil deeds or the deeds that are not permitted by Islam. Allah says in Quran:
“Friends on that day will be enemies of each other, except the righteous.” (43:67)
Therefore, one must befriend those who are good and do good, instead of sitting with people who are neither good nor encourage goodness.

5.
Look At The Brighter Side:
In life there come moments when one gets desperate, as one puts the highest amount of efforts in the youth, therefore, the probability of disappointment also increases during this time. Being a Muslim, a youth must always look on the brighter side of the picture, because when one believes in Allah, one also believes in the fact that Allah is the best friend that  person can have and one could definitely trust Him with life. Allah says in Quran:
“…..Indeed Allah loves those who put their trust (in Him).” (3:159)
Therefore, every Muslim in his or her youth must trust Allah and this approach will help a person keep an eye on the brighter side of the picture.

6.
Hold Yourself Accountable:
There is no denying the accountability that a Muslim will face in the life Hereafter, however, a Muslim must also get in the habit of holding him or herself accountable during youth. A Muslim by learning Quran and following the Sunnah has a clear picture of what is right and what is wrong, therefore, one must hold one’s self accountable pertaining to following the path of righteousness. The more a Muslim practices self-restraint, the better he or she gets at the path of righteousness and the youth is spent away from the path of evil.

7.
Consider Even The Minutest Good Deeds:
In youth one aims for doing the best and out of the world deeds. It is quite possible that in aiming for doing a deed that is out of this world, a Muslim youth might spend the youth by ignoring the little deeds. A Muslim in his or her youth must consider the minutest deeds such as saying Salam to someone or removing something from the path of someone and so on. Therefore, the small deeds should never be ignored for the higher and bigger good deeds. 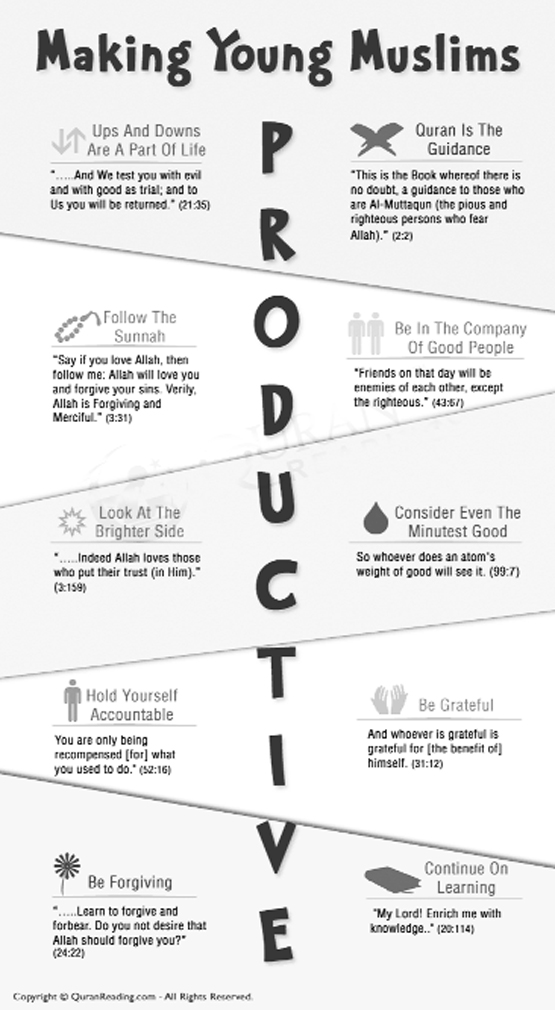 9.
Be Forgiving:
Another aspect which needs to be present in a Muslim during the time of the youth is forgiveness. In youth a person has power and in this power, people don’t forgive others and take revenge on others or take out their anger. A Muslim must not be so and should be forgiving to other people, as Allah says in Quran:
“…..Learn to forgive and forbear. Do you not desire that Allah should forgive you?” (24:22)

10.
Continue On Learning:
Youth is the best age to make the struggle for learning. Although there is a strong probability of a Muslim pursuing some education in youth, however, the difference between education and learning needs to be made and a Muslim should learn things by understanding them, instead of just reading them. Ergo, a Muslim in his or her youth should supplicate to Allah and try the level best to increase learning.
In a nutshell, a Muslim must realize the importance of youth and should spend it in doing deeds that are in accordance with the will and instructions of Allah Almighty. This time of life spent on the path of righteousness is far better than the old age spent in righteousness because at that time all the energy and worldly attraction diminishes and one ought to do good deeds. Therefore, youth needs to be spent in doing good and staying on the path of goodness.