The last time Candice LaFaver spotted the purple grains of sand along the shoreline at Candle Lake Provincial Park was in 2018.
That July, she and her family had taken out their boat for a leisurely summertime cruise on this freshwater lake located in northern Saskatchewan when she glanced over to a deserted stretch of beach and couldn’t believe what she saw.
Near the lake’s north-eastern edge, an area that can only be reached by boat, LaFaver noticed a thick stripe of vibrantly coloured sand wrapping across the shoreline like a ribbon on top of a present.
“I hadn’t seen that big of a ribbon in a long time,” recalled LaFaver, who works as the park manager for this government-protected landscape that spans 78 sq km and has become a recreational haven for outdoor enthusiasts.
“Some years you can’t see it until you’re on it. Other years, just a band of it appears,” she said. This particular band, she added, measured about 60cm wide and spanned the entire length of the beach, and was one of the largest she had ever seen.
For 25 years, LaFaver has lived in the tiny resort village of Candle Lake, a community of 850 full-time residents that falls within the provincial park boundary lines. She’s seen how the hue and length of the coloured sand fluctuates with the changing of the tides and the seasons. So, on that afternoon, knowing that next year it may not appear in the same illuminating fashion, or at all, LaFaver and her family seized their opportunity.
“We got off the boat and hung out there the whole day,” she said. “I didn’t know when I would get to see it that distinct along the whole shore [again].”
Known simply as “Purple Sands Beach”, this secluded expanse of land has earned a reputation around Canada for its awe-inspiring geological feature. The grains of sand can appear in a spectrum of chromatic hues, ranging from lavender to magenta and sometimes even pink. Vivid particles can appear smeared down the shore like an artist’s brushstroke, scattered in clusters across rocks and rippled beneath the water’s surface in the lake’s shallow bays.
Seeing this natural phenomenon in person has become a pilgrimage for naturalists, geological fanatics and out-of-town visitors, who arrive year-round with hopes of catching a glimpse before it disappears underneath snowfall for much of the year or becomes washed away in the tide. 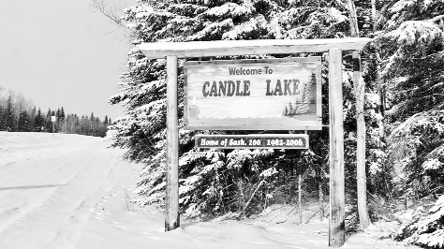 “Well, you don’t think it’s real,” said Debbie Hunter, 64, a Candle Lake local who lives near Minowukaw Beach, one of the park’s designated campgrounds.
After a strong windstorm or an occurrence of large wave breaks, Hunter has seen traces of the purple sand displaced all around this landscape that shares a border with provincial forestland. Some residents have even reported seeing the coloured grains along the shores of Torch Lake, a smaller body of water that feeds into Candle Lake, but not in the same copious amount or vibrancy.
Wherever it is, Hunter said, “it’s hard to believe that there’s purple sand. It’s just – it’s bizarre, really.”
While the imagery of purple sand may appear like something from a fairy tale, there is a geological explanation behind it. According to Kevin Ansdell, professor of geology at the University of Saskatchewan in Saskatoon, all beaches attribute their colouring to the minerals, rocks and shells that comprise their various sand particles.
“If you go around the world, there’s all sorts of different coloured beaches,” explained Ansdell, whose work includes public outreach and education about the diversity of geological landscapes within Saskatchewan. “Obviously, the most common are the typical white sands that you think about. Those are typically made of lots of rounded grains of quartz.”
As the second-most common mineral found on Earth, quartz is the reason why so many shorelines have white sand, he said.
However, white is not the only hue to decorate a coastline. Iceland and Hawaii, for example, each have a collection of black-sand beaches, which owe their dark and moody tones to volcanic lava rock. And there are other examples around the world where minerals and sediment have transformed bodies of water into surreal-looking landscapes. Peyto Lake in Banff National Park in Alberta owes its turquoise colour to glacial sediments suspended in its water; while the Yellow River in western China, which originates in the province of Qinghai, has accumulated so much silt and sediment that the river remains a constant shade of blonde.
The environment of northern Saskatchewan, however, owes its colouring to a mineral that has been discovered all around the world but is found in large quantities across northern Canada. “With the purple-sand beaches, of which Candle Lake is one example,” Ansdell said, “the most likely mineral is the mineral called garnet.”
For thousands of years, this colourful and resistant mineral, one that comes in a variety of shades but which is mostly seen as dark red, has been discovered in rocks across the Canadian Shield, a large section of the North American continent that encompasses a majority of the northern half of Canada. This mineral-rich landmass extends from Labrador in the east to Manitoba in the west and all the way north into the Northwest Territories, including most of northern Saskatchewan. Because of this landscape’s vast size and ancient history, the resources found in the Canadian Shield have become valuable components of the nation’s economy.
“In the Canadian Shield overall, there’s lots of different mineral deposits,” said Ansdell, of the gold, copper, nickel and even diamonds that are often uncovered, in addition to minerals like garnet. 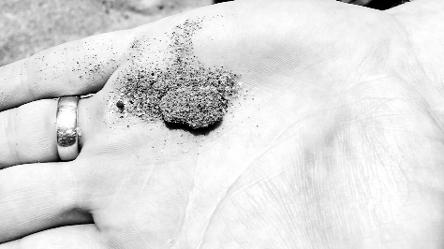 Found inside rocks that date back more than a billion years, garnet is created during metamorphism, a chemical and mineralogical process that happens when rocks become buried deep inside the Earth’s crust as its tectonic plates shift. Through various processes, these rocks change their internal compositions to adjust to higher pressures and temperatures, Ansdell explained.
“Obviously if you’ve got garnet in the sands, the garnet must have come from somewhere,” he said. “It’s almost certainly the metamorphosed rocks in northern Saskatchewan.”
These rocks were then transported across the province during the most recent Ice Age, which ended approximately 12,000 years ago, when large sheets of ice slid across exposed sections of the Canadian Shield, scattering their contents in places like Candle Lake. Over time, the rocks were broken down and carried downstream by fresh water sources, reworked by the tides and eventually collected in one place, said Ansdell.
While the residents of Candle Lake may not know all the scientific details about how its most famous beach receives its alluring sparkle, they do remember how it felt when they saw it for the first time.
“I was a just kid, probably just 14,” recalled Hunter, about her first encounter with the purple sand more than 50 years ago. Hunter grew up in the nearby city of Prince Albert and began visiting the lake before there was a paved highway. “If you had rain or any miserable weather… yikes,” she joked, about making the 80km journey to visit her husband’s family who owned a cabin in the Candle Lake community.
Back then, mostly avid fisherman and hunters were drawn to the lake’s clear water that is home to many fish species, including the walleye, pike, perch, burbot, whitefish and sucker, and its abundant wildlife, like elk, bear, wolves and deer. After a new highway was constructed in the mid-1970s, which connected this distant village to the rest of the province, word spread and Candle Lake quickly became a year-round destination.
In 1986, the government of Canada established it as a provincial park, to “protect the fringe of the northern forest and to offer a variety of recreational opportunities in all seasons.” 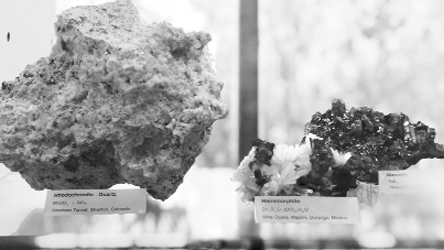 Like many environments in the upper reaches of the northern hemisphere, Candle Lake is one of extremes. During the winter months, its glassy surface transforms into a barren ice field. Pickup trucks and ice shacks dot the horizon and provide shelter for the brave fishermen who, even when temperatures drop to -30C, drill holes into this dense, icy covering to catch their dinner. Locals stay active by playing in the town’s curling league and shovel snow for their neighbours who may need extra help, said Hunter, who serves as a volunteer fire fighter and first responder.
“The people are so friendly,” she said. “It’s a small-knit community and they seem to look out after each other.”
By late April, longer days and warmer temperatures help the lake thaw out, and by July, families start to arrive by the carload to celebrate Canada Day, the busiest time of year, when close to 15,000 visitors pack the shoreline to celebrate the national holiday.
No matter what time of the year it is, Purple Sands Beach and the beauty of this rugged landscape attracts people from around the world, and some of its biggest admirers plan to stay for a while.
“I’ve done a lot of travelling, but work has kept me here and I’m very content with that,” said LaFaver. “[Candle Lake] is a beautiful place to work and live.”
Written by Ryan MacDonald