Before we met, you showed me your diary.
I must confess that I am still confused by this sequence of events, as, I imagine, you must be confused by my decision to leave your life so suddenly. I’ve gone over everything in my head time and time again and I can’t shake the feeling that, somehow, everything got mixed up. Though this may seem a flimsy reason to you, it is reason enough for me. I don’t understand, so I’m going to leave.
Before we met, you showed me your diary and then we were having sex on the wooden floor of your living room. I still remember the way the plants filtered the sunlight and the sound of the tea kettle building up steam. Then our son was at the foot of the bed, asking me where you’d gone. 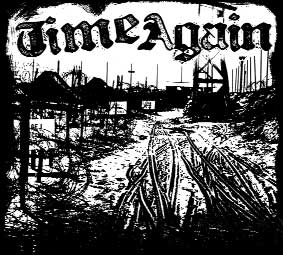 “I don’t know,” I told him, “I expect she’ll be back soon.”
Today I went into your study and found that you’d converted it into a gallery. The first photo of every roll of film we’d ever had developed was there, somewhere. I found that I could date every one, even the ones that hadn’t happened yet. They seemed to go on forever, a jumbled mess of happy memories, each one partially obscured by blinding white light. I knocked over a jar full of tacks but when I went to pick them up I was overcome with vertigo and I had to leave.
We were making desperate love in your basement when you told me about spacetime. You said that the future is just as real as the past. You told me that just because you aren’t there yet doesn’t mean it isn’t real. You said it was like Baghdad still being real when you’re in London. You talked about personal time and light cones and folding space and I didn’t understand anything except the way that your breasts moved and the way your breath misted in the cold. Then we were on a roller coaster and you were screaming and you said, “This is what it’s going to be like all the time.” A balloon seller lost hold of his wares and they floated majestically into the sky. It was beautiful.

2.
After you introduced yourself, we resumed our date and I asked you again why you’d chosen a drive-in. You told me that you had a special soft spot in your heart for B-movies. You said that there was something endearing about the earnestness of it all. You said that they called out to our imaginations in a way that big budget films can no longer achieve. You said that all science fiction – no matter how dismal – was optimistic in that it assumed that there would be a future at all. We were in a board room and you were explaining to the assembled group of investors about the Machine. They were smiling and nodding. They didn’t really understand but experts had told them that your idea showed promise and, after all, a war was on. The coffee tasted terrible and I kept fidgeting in my seat. You were radiant. No one thought to ask what would happen if the Machine broke.
Today, I watched an egg assemble itself on the kitchen floor. It made a strange popping noise as the last bit of eggshell attached itself. It flew into the air up and up and then came to rest on the counter. A helicopter roared overhead and our son came in and told me he was scared. I didn’t know what to tell him. The war has begun and no one can say how or when it will end.
I remember your reaction when you read this letter. I remember how the last line, where I say “we weren’t meant to live like this,” brought a tear to your eye and you turned to our son and tried to explain to him that I was gone. But how could you explain? What does ‘gone’ mean to a child his age? Then we were lying together under the stars and when the first fireworks went off, you leaned over and kissed me for the first time. You tasted like popcorn. I can’t blame you for choosing a new husband.
When you finally came back, you were younger. That was the hardest for both of us, I think. We didn’t share the same memories anymore. You held me and told me that it would be alright, that you had hardly changed but I think that we both know now that that wasn’t true at all. Time changed people. That’s how it worked.

3.
Today, I went down to the basement and stared at the Machine. I can still remember the day you turn it on. You’ll stand in front of a crowd of reporters with our son and your new husband at your side and you’ll give your speech about the tyranny of time and death and the triumph of science and about setting us free. But inside, you’ll be thinking, “I wish he had been here to see this.” I know this because, before we met, you showed me your diary and you wrote about this day. How could you not? It was the most important day of your life. You saved us from the enemy and ended the war. You asked me to stop it. There’s nothing I can do. The future is just as real as the past. There is no before or after anymore. Because of you, there never was.
We weren’t meant to live like this.