For the first time, scientists have precisely captured a map of the boisterous bang radiating from a lightning strike. The work could reveal the energies involved in powering some of nature’s flashiest light shows.
As electric current rapidly flows from a negatively charged cloud to the ground below, the lightning rapidly heats and expands the surrounding air, generating sonic shock waves. While scientists have a basic understanding of thunder’s origins, they lack a detailed picture of the physics powering the crashes and rumbles.
Heliophysicist Maher Dayeh of the Southwest Research Institute in San Antonio and colleagues sparked their own lightning by firing a long, Kevlar-coated copper wire into an electrically charged cloud using a small rocket. The resulting lightning followed the conductive wire to the ground. Using 15 sensitive microphones laid out 95 meters from the strike zone, Dayeh said he and his colleagues precisely recorded the incoming sound waves. Because sound waves from higher elevations took longer to reach the microphones, the scientists could create an acoustic map of the lightning strike with “surprising detail,” Dayeh said. He presented the results May 5 at a meeting of the American Geophysical Union and other organizations. 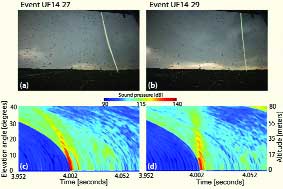 The loudness of a thunderclap depends on the peak electric current flowing through the lightning, the researchers found. This discovery could one day allow scientists to use thunder to sound out the amount of energy powering a lightning strike, Dayeh said.
SHOCK AND AWE: Scientists shot a long copper wire into a lightning-prone cloud using a small rocket. The generated lightning followed the wire down to the ground, allowing the researchers to record the sound waves of the resulting thunder. The green flashes are caused by the intense heating of the copper wire.