Wahidul Islam# In school days Bangladeshi students most likely have read an essay on the cow which was not only read but also memorized to appear at exams. But the essay succeeded to help pass the examinations but pathetically failed to inspire the essay readers to make Bangladesh a milk or meat surplus country. The essay could have instilled enthusiasm into every primary student to love, rear or if possible own a cow farm in future as a source of milk, meat and other things. S/he could have learned it for the benefit not only of his family but also for his country.  At least the old good days could have been invoked when every Bangladeshi household had a cowshed full of cattle, a pond full of fish and a granary full of paddy. Indian cows were never ever have to be smuggled into the country. Besides, Indian ministers wouldn’t have to threaten to stop eating beef from their cows. If BSF were to implement Indian minister Rajnath Singh’s instructions strictly, India would be saddled with an additional expenditure in excess of Rs 31,000 crore annually and diametrically Bangladesh’s hard-earned foreign currencies amounting to 38000 crore taka won’t have to be drained out. On top of all Bangladeshi killing on border by BSF could have been stopped successfully.

World Cattle
Before we switch on to cattle situation in Bangladesh let us know the world cattle population and its distribution. The world cattle is estimated to be about 1.3 billion in 2009 when the number of chickens is more than the total number of human population (7 billion). But Bangladesh performs very poor in this sector in spite of 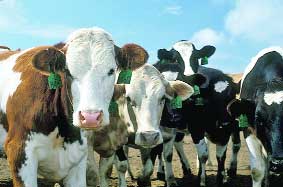 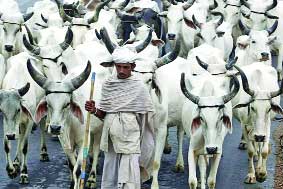 Nuke and Meat
If we look at world nuclear weapons in the light of meat consumption we will be surprised to know some facts. Among the nuclear arms producing nations the US nationals consume meat most while India is the lowest. In 2009 meat consumption was as follows- US (120.2kg), France (86.7kg), UK (84.2kg), Russia (62.9kg), China (58.2kg), Israel (96kg), Pakistan (14.7kg) and India (4.4kg). World average meat consumption is 41.90 kg per person per year. Out of the total consumption beef makes up the 50 per cent of the supply. Among the arms buying countries Kuwait is the highest (119.2kg) consumer of meat while a Bangladeshi eats the lowest (4kg) amount of meat in one year. Those old good days have gone with the decrease in meat consumption in Bangladesh which is going to have nuclear plant at Rooppur. With the same amount of meat consumption India is producing nuke weapon whereas Bangladesh is far away from having nuclear technology.

Belief and Beef
Sacrificing animals and corn is as old as Abel (Habeel) and Kain (Kabeel) — two sons of Adam. Muslims as believers in Abrahamic religion have to sacrifice animals in the name of Allah. The meat of sacrificed animals is distributed among the poor. In Bangladesh 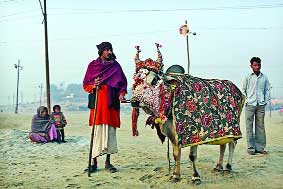 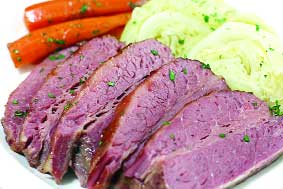 poor people irrespective of cast creed, society and religions enjoy meat during the Eid-ul-Adha. To supply protein to the poor and unfed in this way is obligatory for a practicing Muslim. It is a very humanist activity to ensure protein for the poor. At this present world people need more protein, particularly in Bangladesh and India where people eat over four kilograms meat a year, 116 kg less than those of American consumption. As Bangladesh is predominantly a Muslim country so believers here should raise their own cattle to sacrifice. It would be beneficial both for their belief and Bangladesh. On top of all the UN should declare the day of Eid-ul-Adha as International Day to Ensure Protein for the Poor because majority of the people don’t eat 120 gram protein and 250 ml milk every day. It should be one of the MDGs of the UN which can make governments address this issue.

How Did Cowsheds Disappear?
But over a few centuries last Bangla-speaking people particularly Muslims have experienced socio-economic and educational exploitations under British occupation of the subcontinent. Even with the end of British Raj the marginalization didn’t end during Pakistani period rather the common folks of Bangladesh are still being robbed of their properties undercover. Many problems dogged Bangladeshis with the Hindu zamindars in power. With the economic marginalizationBengalis lost many things including, rich rice variety, fish population and sufficiency in milk and meat. Dairying reached rock bottom when the per capita daily availability of milk and meat stoodat 32.6 ml and 10.2 g against the requirement of 250ml and 120g respectively. In the fiscal 2009-10, total milk shortfall was 10.96 million tonnes, according to Department of Livestock. The major constraints to dairy cattle production are the shortages of quality feeds and fodder, the breeds of cattle, poor management practices, limited access to veterinary care and disorganised marketing systems. In addition, there is a lack of institutional support, research and training, which would be beneficial to the farming environment.

Job Creation and Cattle
Income generation, poverty alleviation are two other major challenges for Bangladesh.The only answer to lift people out of poverty is job creation. Creating jobs in urban areas is expensive due to higher living cost. Cattle farming may be one way out in rural areas to reduce pressure of jobseekers in urban areas. Dairy product companies urge farmers to treat dairy as business instead of treating farming as usual. Cattle farming also offers scope of producing biogas and bio-fertiliser. From cow dung, skin and hide to meat everythingis useful which make dairy a profitable investment. The sector should be declared a priority sector and Ekushey Padak should be awarded to the best cattle farmer in next five years. Farmers’ social status should be recreated. Best farmers should be given sponsorship to visit best cattle farmers in the world.Before that agricultural graduates should be encouraged if possible made mandatory to do animal farming business. On top of all govt should attach special importance to this sector.

What Experts Suggest
Industry analysts link low milk and meat yield to a slow pace in replacement of local cows with the genetically improved ones, a lack of breeding and veterinary services and inadequate investment in feed and fodder development. Farmers also need veterinary care, animal husbandry, dairy housing, quality feed and breed improvement through artificial insemination.Farmers feel to be tipped on better housing and feeding of cows, keeping untied, ensuring light and wind, keeping water jar for anytime drink. The farmers also need de-worming and periodical vaccination for the cows. By importing semen from the US, it also gives artificial insemination services to farmers at cost price with the aim ofimproving existing breeds of cows to scale up milk yield and a revolution. Govt should come up to set up more and more chilling centres, aiding the milk farmers of the country. Private sectors should be encouraged to initiate such projects. 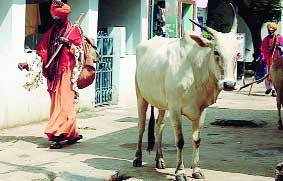 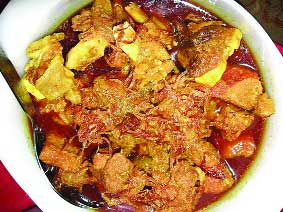 Bangladesh would never be cowed into not beef eating under Indian pressure as it was once a meat and milk rich country in the world. It will also try to depend on its local products made in Bangladesh. The govt would include a cow farm in its ‘Ekti Bari Ekti Khamar’ (one house one farm) project. Even buffaloes can be included in this one house one farm project to help the farmers to be self-reliant on their own milk produces.