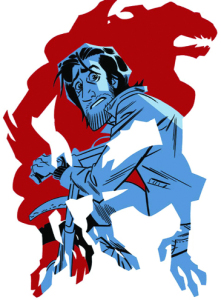 After two days of space travel, I briefly considered suicide. It seemed the only way to save myself from Kael’s crappy rations. The crappiest kind, the white pouches with token descriptions like “MEAT” and “VEGETABLE” stamped across the front in bold, black letters.
“Almost there,” Kael said as he looked out into space from the driver’s seat. I could hear the excitement in my brother’s voice, see it in his eyes that danced as if the pinprick stars and sweeping darkness he saw now was unlike any other patch of infinite space.
I was excited too–about landing and getting a real meal. But Kael was showing all his trademarks signs. This “business” venture he had begged me to see was going to be another one of his get-rich-quick schemes I’d have to say no to. And he would take it like I peed in his bathwater and not speak to me again for another eight months.
I’d let him down easy, and definitely after the meal… my treat. I’d spring for something he couldn’t easily afford like beef or ranthin.
“Wait till you see it, brother,” Kael said in high spirits like there was no way I wouldn’t invest.
“Should be interesting,” I said. He was like this every time, like he was victim to some fairy magic that erased the parade of no’s that marched before. God bless him.
“We better eat before we land,” he said. He reached into a compartment on his armrest and tossed me a “MEAT” before digging one out for himself.
An image of my merciful death by jumping out of the airlock flashed behind my eyes. I tossed “MEAT” back to him.
“We can eat when we land. You pick the restaurant. My treat.”
Kael laughed. The hairs on the back of my neck stood at attention. They were experienced veterans of the things that happened when Kael laughed at words which weren’t funny.
“There’s no food where we’re going,” he said.
I looked at his hands, fumbling with “MEAT”.
“What do you mean, no food?”
“Like I said, Clym. It’s an untapped market. Trust me, you’ll thank me when you see.” He put the pouch up to his mouth and squished.
Suicidal thoughts turned to fratricide. “Thank you? For what, helping me revisit our childhood, where every meal came from these damn packets?”
The reason I had worked so hard was to never have to go back to famine rations again. That crud was for miners and terraformers and a universe full of the huddled poor.
Kael smiled as if there was consolation to be found in his teeth. “I’m telling you…”
“You haven’t told me nil,” I said. “Where the hell are we going? Out with it.”
“See for yourself,” Kael said, his eyes wide as he looked out the window.
A marbled planet grew as we approached. It was instantly recognizable, even without seeing the egregious amounts of space junk cluttering its orbit.
“Earth?! This is your business idea?!”
“You’ll see….”
“No, I won’t see, because there’s nothing of value to see. Jesus, Kael, there’s another 50,000 years projected until the Ice Age ends. I’m not drilling through miles of ice and frozen rock for scant mineral deposits. Turn this ship around.”
He kept going, through the space junk, into an atmosphere that reacted with fiery anger to our invasion. I could relate.
“C’mon, we both know there’s no minerals left,” he said.
“There’s nothing else left either. The Heritage Law prohibits habitation until after the thaw. People took everything worthwhile with them during the Exodus Years. There’s a ban on hunting and farming. Fishing rights are monopolized, or did you not taste that hint of Earth zinc in your “FISH” packets?”
I tapped the dashboard for emphasis. “There is nothing of business value left here.”
Kael pointed out the window. “There’s that.”
An ancient city was half-covered by a thousand foot glacier. I was never interested in architecture; the buildings could have been 19th or 20th or 21st century design. Who cared… those buildings were worthless too.
I buried my face in my hands. Closing my eyes helped. The only things I felt were our descent and the throb behind my temples.
Kael’s face penetrated the darkness behind my eyelids, and I saw an imaginary pitch for some fad market he wanted to invent. “Nostalgia Bricks” or “Homeworld Sandboxes.” Only this time, I’d have to hear about how I was missing out on a golden opportunity for two day’s worth of return trip.
I opened my eyes to him tossing me a thick parka. “C’mon.”

“Ever hear of cryogenics?” he asked, twisting a glowpipe and filling the room with fluorescent light. The light showed a sea of blue bodies asleep in blue tubes.
“Vaguely. It was some kind of pseudo-science the ancients used to practice, like alchemy or hypnosis. It’s stasis only colder.”
“Yep. All the rich people did it in the olden days. God, look at how fat some of them are.”
Many of them were obscenely big. They definitely got more than the standard three meals a day.
“Kael, they’re rich in a standard of currency that’s worthless. We unfreeze them and they’ll pay us in perfectly good paper they ruined putting faces on.”
Kael shook his head. “You need to think as a humanitarian. A savior. This time there’s money in it.”
I looked at a tube. Old Man Death lay inside it, wispy white hair and spotted skin. A lot of these people were super seniors. I pointed at Old Man Death, not bothering to hide my disdain.
“Why would I want to wake up a guy who has to be pushing two-hundred-and-forty?”
Kael came over to the tube and wiped the frost from a metal placard. “I’m going to keep letting you work through it because it’s funny,” he said.
Name: James Beamon. Age: Seventy-Three.
I felt my jaw drop. I had forty-five years on this guy. Then I remembered my history and how gene massaging wasn’t standard practice until after the Exodus.
“Ok,” I said, trying to work out Kael’s odd angle. “We thaw out Prepubescent Grandpa here and his ilk, give them a little gene massage, and we’ll have young experts on all things ancient. We can hire them out as museum curators, movie set designers, architecture consultants. Oh, and geishas! How many bodies are we talking?”
Kael smiled. “Earth has hundreds of these facilities, several thousand blue bodies. The numbers work well with my plan, but it sounds like too many for what you want.”
Kael was right. Only a handful of planets in the known civilized universe could accommodate a niche like this. Many more places were in the “habitation in progress” phase of colonization, where it was a struggle to come by essentials like food and oxygen.
I couldn’t figure out Kael’s logic. I looked at him with skepticism.
“It can’t be some legal loophole. I’m pretty sure I can’t rejuvenate some prematurely old caveman, cure him of dysentery or heartworms or whatever medieval affliction was killing him and come out ahead by writing the whole thing off as a tax break. So what’s this about?”
Kael smiled. “This is about the little guy, not thousands of rich people time forgot, whose families didn’t even want them during the Exodus. It’s about terraformers, miners, a legion of poor folks. It’s about saving them, man. Here.”
He tossed me something so quick I barely had time to catch it. I held it up.
White pouch, black lettering. “MEAT”.
I was shocked.
First time my dumb brother ever had a good idea.