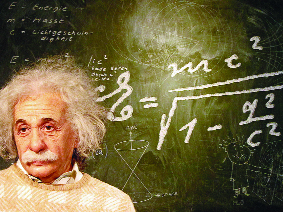 Scientists have enormous contribution in the advancement of human civilization. Throughout the history of the world, many scientists have dedicated their lives for research and innovation. Some of them even faced a lot of torture for their theories but they continued their mission and thus we are now in a modern world. Einstein is the great scientist of the twentieth century and notable physicist of all time. His theory of relativity is considered as a revolutionary development of Physics. He got Noble Prize in Physics in 1921 for his explanation of the Photoelectric Effect and for his research in Theoretical physics.

Childhood and Early Life:
Albert Einstein was born in a Jewish family in Ulm, Württemberg, Germany, on March 14, 1879.  When Albert’s mother, Pauline Einstein gave birth to him, she thought that Einstein’s head was so big and misshapen that he was deformed! When Albert’s grandmother saw him for the first time she is reported to have muttered continuously “Much too fat, much too fat!” Contrasting all apprehensions Albert grew and developed normally except that he seemed a bit slow. The physician, however, was able to calm them down and some weeks later the shape of the head was normal. Albert’s father Hermann began work as a merchant in the featherbed industry, but when his business collapsed, he moved his family to Munich to start an electrical-engineering business with his brother Jakob. This venture was largely supported by the Kochs, Pauline Einstein’s parents. As a child, Einstein seldom spoke. When he did, he spoke very slowly – indeed, he tried out entire sentences in his head until he got them right before he spoke aloud.  Einstein did this until he was nine years old. Einstein’s formal education began at age six, when he enrolled in the Petersschule on Blumenstrasse, a Catholic elementary school in Munich. He was an “average” pupil but already very early interested in science and mathematics. He did not like lessons in school as they were held with strict discipline and as he was forced to learn.
At the tender age of five, Einstein was greatly influenced by a pocket compass given to him by his father. The movement of the needle had an everlasting impression on his young mind. In effect, as he grew, he started building models and mechanical devices, showing deep interest in mathematics.
At the age of ten, Einstein was accepted into the Luitpold Gymnasium in Munich, a formal and respected institution that emphasized Latin and Greek over mathematics and science. Unhappy with the educational program at school, Einstein turned to a course of personal study outside of school. His Uncle Jakob lent him a book of algebra and sent him math puzzles to solve. In addition, a twenty-one-year-old medical student named Max Talmud, a friend of Einstein’s family, lent him books on popular science and philosophy that the young boy eagerly devoured. After his father’s business failed, Einstein’s family moved to Pavia. During this time, he wrote his first scientific work, “The Investigation of the State of Aether in Magnetic Fields” By the age of twelve, he had learnt Euclidean geometry and studied calculus.
When he turned 15 he left school without any degree and followed his family to Milan, Italy. To make up for the missed degree he attended school in Aarau (Switzerland) from 1895 to 1896 when he successfully took his A-levels and began to study in Zurich. Though Einstein studied physics diligently during the summer of 1895 in preparation from the Zurich Polytechnic, he failed the necessary exams for admission. At the suggestion of the principal of the Polytechnic, he spent the next year in a Swiss secondary school in Aarau preparing to retake the examination. By the time he received his diploma in 1896 and successfully finished his studies with a degree in physics in July 1900. He had become a confident, self-assured, and increasingly communicative individual; a far cry from the quiet and lonely boy of his gymnasium days.His ambition was to obtain the diploma of a subject teacher for mathematics and physics. After graduation, he could not find a teaching job and after two years of struggle, was employed at the Swiss Federal Office for Intellectual Property, the patent office, as an assistant examiner.
With a few friends he met in Bern, Einstein started a small discussion group, self-mockingly named “The Olympia Academy”, which met regularly to discuss science and philosophy. Their readings included the works of Henri Poincare, Ernst Mach, and David Hume, which influenced his scientific and philosophical outlook.

Early Works
At the age of 26, Einstein was awarded a PhD by the University of Zurich. In 1911, Einstein became an associate professor at the University of Zurich and soon, was a full professor at the Charles University of Prague. Here, Einstein published a paper about the effects of gravity on light, specifically the gravitational red shift and the gravitational deflection of light. In 1912, he accepted professorship at ETH and in 1915, published a paper on general theory of relativity. In 1917, Einstein published an article on stimulated emission as well as a paper on the cosmological constant.

Contribution:
Einstein published more than 300 scientific papers along with over 150 non-scientific works. In 1905 he published several of his important scientific works. One of them deals with the ground-breaking special theory of relativity. Another work contains the most famous formula of the world “E = mc2”. This formula states that matter can be converted into energy.
Einstein’s famous formula:
In this mathematical equation, E stands for energy, m for mass and c for the speed of the light in a vacuum (ca. 300,000 km/s).
From 1909 to 1916 Albert Einstein worked on a generalisation of the special theory of relativity, the general theory of relativity. After this theory was proven right in an experiment in 1919 (deflection of light by the sun’s gravitational field) Einstein became famous over night. He received invitations and honours from all over the world. There was hardly any magazine which did not report about him and praise his work to the skies.
His theory of relativity is considered as a revolutionary development of Physics. He got Noble Prize in Physics in 1921 for his explanation of the Photoelectric Effect and for his research in Theoretical physics.
Social Activist
For his time, Albert Einstein was a social activist, giving speeches promoting pacifism and liberalism. One of Albert Einstein’s most famous quotes is “I know not with what weapons World War III will be fought, but World War IV will be fought with sticks and stones.”

Death
Einstein died on April 18, 1955, due to internal bleeding caused by the rupture of an aortic aneurysm, which had previously been diagnosed and reinforced. The legendary scientist died in Princeton Hospital, New Jersey in USA, at the age of 76, but worked till the very end. After receiving Nobel Prize in Physics, the legendary scientist is often regarded as the father of modern physics, and one of the most prolific intellects in human history. In the year 1999, ‘Time magazine’ named him the ‘Person of the Century’.