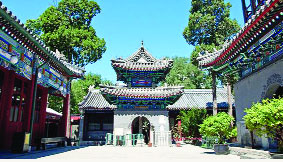 Despite being officially atheist, and historically most closely associated with Buddhism, China has a deep-rooted relationship with Islam, dating as far back as the 7th Century. At least 1.8% of the population, or roughly 24 million people, identify as Muslim, making China’s Muslim population roughly the size of Yemen’s and eight times more numerous than the United Kingdom’s.
In recent months, China’s Uighur Muslims have garnered the most media attention as violence has intensified in the autonomous western region of Xinjiang. Although Xinjiang has been under Chinese communist rule since 1949, capital officials in ceijing have recently intensified its efforts to control the region and its religion, leading to clashes with the indigenous Uighurs, the region’s largest ethnic minority.
But while violence from the conflict spillcd briefly into Beijing in November 2013, the capital’s relationship with its own majority Muslim community, the Hui, remains peaceful. With Xinjiang currently a shaky region for foreign visitors because of security concerns, Beijing’s Muslim quarter, Niu Jie, offers another way for travellers to explore Islam’s intertwined history with Chinese culture. Pictured here, the Ncu Jie Mosque is the oldest and largest in Beijing, built in 996. (Amanda Ruggeri)

Uighur food
Wander around the Beijing quarter of Niu Jie, and you might feel as if you’ve been transported out of China – or, at least, to a perfectly blended Arabian version of China. Signs are in Arabic, restaurants sell halal versions of central Asian dishes (like the lamb encrusted with sesame, shown here) and many people wear traditional Hui Islamic clothing, including white caps for the men and headscarves for the women.
Just down the street from Niu Jie Mosque is Tu Lu Fcn Restaurant. Opened in 1985 by a Uighur owner, it was one of the first and, today, is one of the most popular restaurants serving Xinjiang cuisine in Beijing. While the Hui are Beijing’s predominate Muslim population, several Uighurs have opened shops and restaurants in Niu Jie, living side-by-side with Hui and Han Chinese. (Amanda Ruggeri)

Hui men
Like the Uighur, the Hui are predominantly Sunni Muslim and count about 10 million strong. But while the central Asian Uighur people have their own kingdoms, language and culture, the Hui speak mostly Mandarin and are largely descended from Silk Road traders, many of whom intermarried with Mongols and the governing Han Chinese. As such, the Hui enjoy far friendlier relations with the current government than the Uighur. (Amanda Ruggeri)

Prayer hall
At the centre of Beijing’s Hui community is the Niu Jie Mosque. Destroyed by the Mongols when they conquered Beijing in the 13th Century, the mosque was rebuilt by the Ming dynasty in 1442 and enlarged again under the Qing at the end of the 17th Century, bringing it to its elaborate, 6,000sqm layout today. As with other mosques across eastern China, and perhaps in a symbolic nod to how the Hui have adapted certain aspects of Han Chinese culture, the Niu Jie Mosque deftly blends both Arabic and Chinese influences. The prayer hall’s wooden beams are emblematic of Chinese architecture, for example, but instead of being aligned north-south, as is traditional with Chinese architecture, the sanctuary – where only Muslims are allowed to enter – is oriented toward Mecca. (Amanda Ruggeri)

Tombs of the shaykhs
As with other eastern Chinese mosques, Niu Jie is set up pavilion-style, with independent buildings serving different functions. In one of its courtyards lie these two black tombs, built for shaykhs who came from Arabia in 1270 and taught at the Niu Jie Mosque. Behind are their tombstones, inscribed with Arabian script. (Amanda Ruggeri)

Imperial animals
Images of animals were, as per Muslim tradition, forbidden in the buildings’ painted decorations. But the mythical creatures on the mosque’s Chinese-style flared, tiled roofs add an imperial Chinese touch: similar animals can be seen on the eaves of other structures across Beijing, including those in the Forbidden City, and they symbolise elements that bring good luck and ward off evil. (Amanda Ruggeri)

Adapting Arabic influences
These details on the South Stele Pavilion, built in 1496, show how the Chinese adapted Arabic influences to their own needs:
Islamic calligraphy is surrounded by stylised patterns of lotus flowers. The brilliance of the colours here largely stems from a 1979 renovation that included re-gilding and repainting the mosque’s structures. (Lonely Planet/Getty)
Breaking fast
Most of Beijing’s Hui Muslims live in the residential quarter surrounding Niu Jie Mosque, and it is a popular place for both regular prayer and celebrating holidays. Here, a man serves food to worshippers at the mosque during Ramadan, the ninth month of the Islamic calendar, which requires followers to fast from sunrise to sunset. (Sylvain Grandadam/Getty)

Muslim food, Buddhist festival
Of course, Hui and Uighur influences extend beyond Beijing’s Niu Jie neighbourhood. Here, Muslim vendors serve Xingjiang food from their stall at the ChangdiancTemple Fair – a 400-year-old festival in Beijing’s Xuanwu District, which got its start thanks to the area’s three Buddhist temples and their celebrations of the first lunar month. Today, it is one of the city’s most popular festivals for Chinese New Year – by welcoming Beijingers of every religion. (Christian Kober/Getty)