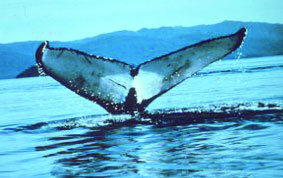 It doesn’t matter how seasick people may feel. When a whale appears, nothing else matters, says whale researcher Steve Palumbi. “Everyone—from 5 to 95 years old—rushes to the side of the boat.”
“Whales have that effect on people,” Palumbi adds. He’s a biology professor at Stanford University.

It might be their gargantuan size, their beautiful and haunting songs, which can travel underwater for thousands of miles, or the fact that they’ve been on Earth for a long, long time. Then again, whale awe might come from something beyond words.
“Something about them is just magical,” Palumbi says. “They’re magnificent creatures. They’ve been swimming the seas for 20 million years. It should be no surprise that they’re the masters of the ocean.”
These ocean rulers, however, are in big trouble. Between 1925 and 1975, whale hunting destroyed many of the world’s whale populations. By the time whaling was officially banned in 1986, some species had already become extinct. Others are still struggling to recover.
Meanwhile, countries such as Japan and Norway have found ways to continue hunting whales for their meat and blubber. And they’re trying to get permission from the International Whaling Commission to start whaling again on a large scale in the next 5 years.
Whales face other threats, too. Lots of boat noise can prevent them from communicating with each other. And pollution may be poisoning the fish they eat.
Despite the admiration that whales inspire, scientists still don’t know many things about them. “Much of what whales do and how they live their lives is still a secret,” Palumbi says.
So, scientists such as Palumbi are working hard to unravel the secret lives of whales. Their goal is to find ways to protect them for generations to come.

Polluted waters
Oceans act like giant conveyer belts, spreading dangerous chemicals such as DDT and dioxins around the world, says Roger Payne. He heads a whale conservation organization called Ocean Alliance.
As toxins move up the food chain, from fish to whales (and people), they get more and more concentrated in muscle and fat tissue, which increases potential health hazards.
Payne’s organization has sent a ship named the Odyssey on a 5-year, worldwide cruise to collect data. Researchers aboard the ship are gathering skin samples from sperm whales, then analyzing the samples for pollutants.
“The first question is: How bad is it?” Payne says. “Until we can answer that, we can’t really get anywhere.”
The voyage’s goal is to create a map of pollution in oceans around the world. This information should reveal something about how our waste is affecting long-lived mammals like whales.
Sample collection is still underway. So far, testing of 30 whale samples has revealed the presence of pollutants in every single one.
If most other samples turn out to be contaminated, the findings could also be a warning to people. Seafood is the main source of animal protein for 70 percent of people on Earth, Payne says. If the seafood we eat is tainted, our health could be at stake, along with that of whales.
Loud noise
Chemicals are not the only kind of pollution in the ocean. Noise is also a major problem, says Christopher Clark. He’s director of Cornell University’s bioacoustics research program.
In his research, Clark uses highly sensitive microphones that were originally developed by the U.S. Navy to track ships. The microphones are so sensitive that Clark calls them “the Hubble telescopes of the sea.” The Hubble Space Telescope is an orbiting instrument that has provided extremely detailed images of the universe.
Now, Clark is using these microphones to pinpoint where whales are, how they move, and what sounds they make.
Whales generate a variety of sounds, sometimes creating long and intricate melodies. No one knows what whale songs mean, but the tunes can be very complex.
Some scientists suggest that whales make such noises to navigate and communicate. They might keep track of each other, tell others where food is available, and find each other to breed. I wonder if they also talk about the weather!
Clark’s research has shown that whales use low-frequency sound waves to communicate with each other across hundreds, even thousands of miles of water. This means that a whale off the coast of Newfoundland, way up in northeastern Canada, can hear its friends in Puerto Rico, 1,600 miles away in the Caribbean.
But there’s a problem. Ships make a lot of noise, and there are lots of ships out there. All of that “acoustic smog,” Clark says, has greatly reduced the ability of whales to hear each other.
Cape Cod Bay on the coast of Massachusetts is a particularly extreme example, Clark says. The bay is a critical habitat for northern right whales, but the noise is persistent and the levels are very high.
If there were this much noise on land, Clark says, a government agency called the Occupational Safety and Health Administration (OSHA) would order us to wear earplugs or stay away to protect ourselves and keep from going deaf.
Whales might end up leaving their homes or swimming to different depths to avoid loud noises. Such moves could create further problems, a recent study by scientists at the Woods Hole Oceanographic Institution suggests.
The researchers found that whales can get “the bends” in the same way that scuba divers do when they swim too deep, stay down too long, or rise too quickly to the surface. In this ailment, bubbles of gas in the blood can cause severe pain and even death, both in people and in whales.

Deep food
Protecting whales is especially important because a variety of species depend on them for survival, says Craig Smith. He’s an oceanographer at the University of Hawaii, Manoa, and he studies “whale falls.” A whale fall is a dead whale carcass that sinks to the bottom of the ocean.
The body of a 50-ton whale can sustain up to 80 years worth of life, Smith says.
The blind zombie worm is one example. These odd worms feed on whalebones and grow into mats that look like fields of tall grass waving in the wind.
“The communities are remarkable,” Smith says. One whale can support 3,400 individual creatures that belong to more than 200 species, including mussels, sharks, clams, and worms.
“It’s among the most species-rich habitats in the deep sea,” he says.
A decline in whale populations would mean a decrease in whale falls. As a result, many specialized species would become extinct. For example, calculations show that, if whale falls went down by 75 percent, about 30 to 40 percent of the species that depend on these falls for survival would die out.
Even reducing whale falls by half would cause 15 percent of dependent species to disappear. That’s troubling, Smith says, because some people argue that killing 50 percent of whales would do no harm.

Hunting ban
Not all the news is bad news. Using information buried in whale DNA, Palumbi’s research has shown that Antarctic minke whales have been thriving for as long as 2 million years. Through ice age after ice age, their numbers have continued to grow steadily. Whaling seems to be the only major threat they face.
However, a complete ban on whaling may be the only way to save the world’s whale populations and all of the species that depend on them, many researchers say. At the same time, countries such as Japan and Norway see the sale of whale blubber as a major source of income.
The best thing scientists can do now, Palumbi says, is to learn as much about whales as they can in order to document the negative effects of whaling. With rapid advances in technology, the opportunities for understanding these marvelous animals seem to be better than ever before.
“Learning about how whales live their lives, how they have lived their lives, and even how they die takes more than just looking at them from the surface,” Palumbi says. “It takes technology—new technology that pushes back the curtain of the ocean.”
Though there’s a lot left to be discovered, new technology and new research is beginning to fill in the gaps in the secret lives of whales.