The weight of thought 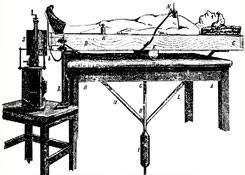 The brain takes on blood — making it a bit heavier — as someone thinks heavy thoughts
In the late 1880s, an Italian scientist reported that thinking can make the brain grow heavier — if only for a short while. The scientist, Angelo Mosso, placed volunteers on a full-body balance, which looks like a teeter-totter. Then he asked them to concentrate on something. And suddenly their heads grew heavier.
Scientists have just performed an updated version of that experiment and confirmed Mosso’s supposedly wacky findings. David Field and Laura Inman work at the University of Reading in England. As neuroscientists, they study the brain and how it functions. Field was teaching a class on imaging the brain when he and some students decided to investigate Mosso’s claim.
“It was a bit of a mad idea, to be honest,” Field told Science News.
On Mosso’s balance, a person would lay down longways so that his or her weight was balanced over the fulcrum. And like a playground teeter-totter, the board tilted (lowering somewhat either the head or the feet) as the distribution of weight changed.
Field and Inman decided to use a similar device. Instead of tilting, however, their machine had a scale under the end of the board where the head lay. The idea was that when a person thinks deeply, more blood flows into the brain. That increase in blood in the upper part of a participant’s body would be recorded by the scale.
Next the scientists recruited 14 volunteers to lie on the device. Each would listen to music, some while also watching a video. The idea, Field explained to Science News, wasthat combining sound and visual information might activate a larger part of the brain.
Each person heard a brief snippet of music. Immediately after, the reading on the scale changed in a way that suggested blood had flowed out of the brain. A few seconds later, the scale showed an increase that suggested an even larger surge of blood had poured back into the brain, briefly making it heavier. These changes in blood flow were stronger in people who had been watching a video while listening to the music.
Both the dip and the surge were very small. But the surge was big enough to suggest that when a person thinks hard, the brain gains blood overall. Field and Inman published their findings in Brain on January 9.
The new finding supports what Mosso first claimed: that harder mental tasks had a bigger impact than easy ones. Reading a newspaper article had less of an effect, for example, than reading a paper on mathematics, he found.
Stefano Sandrone, a neuroscientist at King’s College London, recently brought attention to Mosso’s work. He uncovered a description of Mosso’s old experiment in storage and last year reported its discovery in the journal Brain.
“We have been neglecting Mosso and his work for so many years,” Sandrone told Science News. “It’s good that someone has begun to find interest in the papers that he wrote.”