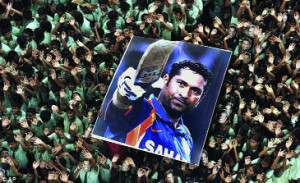 Tendulkar quits cricket with heart breaking speech
“My life between 22 yards for 22 years, it’s hard to believe that wonderful journey is coming to an end,” are words from the last speech that Tendulkar gave at the post match presentation ceremony in Mumbai on 16th of November. The 40-year-old brought the curtain down on a 24-year career that has seen him play more Tests and score more runs than any man in history.
Tendulkar’s 74 on the second day of the Test after starting on an overnight 38 contributed to the home side’s 495 in reply to the tourists’ 182. The West Indies were then dismissed for just 187 in their second innings as they lost by an innings and 26 runs.
Tendulkar’s tally of 100 centuries is just one of many records he has amassed since making his debut for the national side on November 15, 1989. He ended his career with 15,921 runs in the Test arena at an average of 53.78 and an overall average of 48.53 with 34,357 runs in all forms of the game, with his highest score being 248 not out against Bangladesh. Tendulkar holds dozens of batting records, including most runs and centuries in both Tests and one-day internationals.
The atmosphere at his home Wankhede Stadium in Mumbai had been at fever pitch throughout the two-and-a half days of the match with fans eager to see him score a 101st century to complete a fairytale ending. He finished his career with speech that touched all who love cricket regardless of team they support. His last few words were like;
“I believe we have been the lucky ones. We have been chosen by the almighty to serve this wonderful sport”
“Each generation gets this opportunity to merely take care of the sport and to serve it to the best of our ability.”

Bangladesh’s top golfer wins Asian Tour title
Bangladeshi golfing legend Siddikur Rahman rewrote the history by winning the title of the Hero Honda Indian Open, his second Asian Tour title, at the Delhi Golf Club last month. This second victory on the region’s premier Tour in India has also ensured that 29-year-old finishes inside the top-10 of the Asian Tour Order of Merit for the third time in the last four years. ? Siddikur, who earned $ 225,000 (around 1.8 crore TK) from this tour , said, “I’m so happy. After I won in Brunei, I struggled to win a tournament. It was a long day for me, but it’s been the best golf of my life this week.”
The 29-year-old, who led the event from day one, however, had to go through a nervy final round where he played a three-over 75 in his total of 14-under 274. Indian Anirban Lahiri and SSP Chowrasia, they both shared the second spot with Lahiri carding a two-under 70.
Siddikur was the first Bangladeshi to win on the Asian Tour in Brunei in 2010 and was also the pioneer to represent Bangladesh in the ISPS Handa World Cup of Golf on 21st November this year.?? He was part of a selected 60 elite golfers from across the world, including 13 from Asia, who competed in the 8-million-dollar (64 crore Tk approximately) event which is held biannually. The world cup has a team category as well as individual event. Australian Golfers won in both individual (Jason Day) and team category this year.
?As Siddikur was the only Bangladeshi to participate in the event, he only competed in the individual event. Siddikur has made a 75-place leap in the World Golf Rankings by winning his second Asian Tour title in New Delhi. He is now 172nd in World Golf ranking. 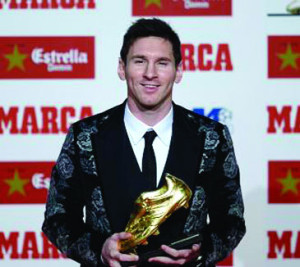 Messi won the Golden boot as Europe’s top scorer
Argentine Barcelona forward Lionel Messi won a record third Golden Boot for scoring the most goals in Europe’s domestic leagues last season. The 26-year-old Messi helped Barcelona win the 2012-13 Spanish league by scoring 46 goals despite missing several games with a right hamstring injury near the end of the season. Messi also won the award for 34 goals in 2009-10, and a Spanish record 50 in 2011-12. The first player to receive the award three times, Messi dedicated his latest trophy to his family and his teammates, calling it a team award. According to Messi, ‘‘it is a group award more than an individual one because those are a lot of goals I wouldn’t have won it without them, this one or the previous ones.”
Messi has won the world player of the year award an unprecedented four years in a row. He is again nominated this year. Messi has played a major part in Barcelona’s impressive run of titles in the past decade. He has won three Champions Leagues, six Spanish leagues, two Copas del Rey, two Club World Cups, six Spanish Super Cups and two European Super Cups. Barcelona’s all-time leading scorer, Messi’s 65 goals in the Champions League is second to former Madrid striker Raul Gonzalez’s.
The European Golden Shoe, formerly known as the European Golden Boot, is an association football award presented each season to the leading goal scorer in league matches from the top division of every European national league. At the very inception in the 1967–68 season, the award originally called Soulier d’Or, which translates from French as Golden Shoe or Boot. 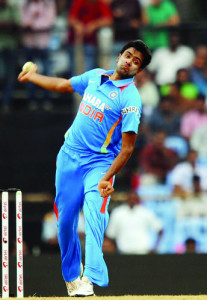 Some unique records in Cricket:
Sachin Tendulkar’s Test career spanned 24 years, which lasted from November 15, 1989, to November 16, 2013, is the fifth longest of all. The great West Indian George Headley lasted a few days longer (1930-1954), while Frank Woolley’s 64 Tests for England were spread over more than 25 years between 1909 and 1934. But the granddaddy of them all is another Englishman, the Yorkshire all-rounder Wilfred Rhodes, who played his first Test in June 1899, and his last in April 1930, when he was 52 – a span of almost 31 years.
Shivnarine Chanderpaul is the only current player started his Test or ODI career longest ago. Sachin Tendulkar was the last remaining player who made his Test debut in the 1980s. Shivnarine Chanderpaul – he made his Test debut in March 1994, and reached 150 caps in Mumbai just as Tendulkar reached 200. Only six other men who have played Tests this year made their debuts in the 1990s, and one of those (Ray Price) has also announced his retirement. The others are Jacques Kallis (Test debut in 1995-96), Mahela Jayawardene and Harbhajan Singh (both 1997-98), and Rangana Herath and Tillakaratne Dilshan (both 1999-2000).
Ravichandran Ashwin is the fastest Indian bowler to reach 100 Test wickets.  Ashwin took his 100th Test wicket during the second Test against West Indies in Mumbai. It came during his 18th Test, breaking the previous Indian record of 20, established by another off-spinner, Erapalli Prasanna, in 1969-70. Only four bowlers from any country have reached the landmark quicker than Ashwin: George Lohmann, ( in 16 Tests), while Sydney Barnes and the Australian pair of Charles “Terror” Turner and Clarrie Grimmett got there in 17 matches.
Ashwin is also the fifth quickest in terms of time, tying with Ian Botham on 740 days (just over two years). Quickest to 100 on this measure remains Kapil Dev, who got there in just 473 days, which remarkably included 25 Test matches.
Botham currently holds the record for completing the Test double of 1000 runs and 100 wickets in just 21 Tests (Vinoo Mankad took 23 and Kapil 25). After 18 Tests Ashwin has scored 770 runs at an average over 40, so may threaten that record too.
The biggest difference between a batsman’s first innings and the second, raising the bar to a minimum of 50 innings, the leader is the great West Indian Everton Weekes, with 71.44 in the first innings and 36.64 in the second, a difference of 34.80. Virender Sehwag is second on that list at 32.25 (62.50 v 30.25).