Potato power: the spuds that could light the world 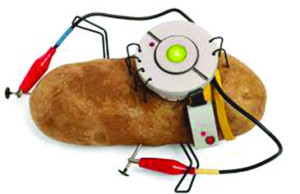 Mashed, boiled, baked or fried? You probably have a preference for your potatoes. Haim Rabinowitch, however, likes his spuds “hacked”.
For the past few years, researcher Rabinowitch and colleagues have been pushing the idea of “potato power” to deliver energy to people cut off from electricity grids. Hook up a spud to a couple of cheap metal plates, wires and LED bulbs, they argue, and it could provide lighting to remote towns and villages around the world.
They’ve also discovered a simple but ingenious trick to make potatoes particularly good at producing energy. “A single potato can power enough LED lamps for a room for 40 days,” claims Rabinowitch, who is based at the Hebrew University of Jerusalem.
The idea may seem absurd, yet it is rooted in sound science. Still, Rabinowitch and his team have discovered that actually launching potato power in the real world is much more complex than it first appears.
While Rabinowitch and team have found a way to make potatoes produce more power than usual, the basic principles are taught in high school science classes, to demonstrate how batteries work.
To make a battery from organic material, all you need is two metals – an anode, which is the negative electrode, such as zinc, and a cathode, the positively charged electrode, such as copper. The acid inside the potato forms a chemical reaction with the zinc and copper, and when the electrons flow from one material to another, energy is released.
This was discovered by Luigi Galvani in 1780 when he connected two metals to the legs of a frog, causing its muscles to twitch. But you can put many materials between these two electrodes to get the same effect. Alexander Volta, around the time of Galvani, used saltwater-soaked paper. Others have made “earth batteries” using two metal plates and a pile of dirt, or a bucket of water.
Super spuds
Potatoes are often the preferred vegetable of choice for teaching high school science students these principles. Yet to the surprise of Rabinowitch, no one had scientifically studied spuds as an energy source. So in 2010, he decided to give it a try, along with PhD student Alex Goldberg, and Boris Rubinsky of the University of California, Berkeley.
“We looked at 20 different types of potatoes,” explains Goldberg, “and we looked at their internal resistance, which allows us to understand how much energy was lost by heat.”
They found that by simply boiling the potatoes for eight minutes, it broke down the organic tissues inside the potatoes, reducing resistance and allowing for freer movement of electrons– thus producing more energy. They also increased the energy output by slicing the potato into four or five pieces, each sandwiched by a copper and zinc plate, to make a series. “We found we could improve the output 10 times, which made it interesting economically, because the cost of energy drops down,” says Goldberg.
“It’s low voltage energy,” says Rabinowitch, “but enough to construct a battery that could charge mobile phones or laptops in places where there is no grid, no power connection.”
Their cost analyses suggested that a single boiled potato battery with zinc and copper electrodes generates portable energy at an estimated $9 per kilowatt hour, which is 50-fold cheaper than a typical 1.5 volt AA alkaline cell or D cell battery, which can cost $49–84 per kilowatt hour. It’s also an estimated six times cheaper than standard kerosene lamps used in the developing world.
Which raises an important question – why isn’t the potato battery already a roaring success?
In 2010, the world produced a staggering 324,181,889 tonnes of potatoes. They are the world’s number one non-grain crop, in 130 countries, and a hefty source of starch for billions around the world. They are cheap, store easily, and last for a long time.
With 1.2 billion people in the world lacking access to electricity, a simple potato could be the answer– or so the researchers thought. “We thought organisations would be interested,” says Rabinowitch. “We thought politicians in India would give them out with their names inscribed on them. They cost less than a dollar.”
Yet three years on since their experiment, why haven’t governments, companies or organisations embraced potato batteries? “The simple answer is they don’t even know about it,” reasons Rabinowitch. But it may be more complicated than that.
First, there’s the issue of using a food for energy. Olivier Dubois, senior natural resources officer at the United Nations Food and Agriculture Organisation (FAO), says that using food for energy – like sugar cane for biofuels – must avoid depleting food stocks and competing with farmers.
“You first need to look at: are there enough potatoes to eat? Then, are we not competing with farmers making income from selling potatoes?” he explains. “So if eating potatoes is covered, selling potatoes is covered, and there’s some potatoes left, then yes, it can work”
In a country like Kenya, the potato is the second most important food for families after maize. Smallholder farmers produced around 10 million tonnes of potatoes this year, yet around 10-20% were lost in post-harvest waste due to lack of access to markets, poor storage conditions, and other issues, according to Elmar Schulte–Geldermann, potato science leader for sub–Saharan Africa at the International Potato Center in Nairobi, Kenya. The potatoes that don’t make it to the market could easily be turned into batteries.

Pithy answer
Yet in Sri Lanka, for instance, the locally available potatoes are rare and expensive. So a team of scientists at the University of Kelaniya recently decided to try the experiment with something more widely available, and free – plantain piths (stems).
Physicist KD Jayasuriya and his team found that the boiling technique produced a similar efficiency increase for plantains – and the best battery performance was obtained by chopping the plantain pith after boiling.
With the boiled piths, they found they could power a single LED for more than 500 hours, provided it is prevented from drying out. “I think the potato has slightly better current, but the plantain pith is free, it’s something we throw away,” says Jayasuriya.
Despite all this, some are sceptical of the feasibility of potato power. “In reality, the potato battery is essentially like a regular battery you’d buy at the store,” says Derek Lovley at the University of Massachusetts, Amherst. “It’s just using a different matrix.” While the potato helps to prevent energy being lost to heat, it is not the source of the energy – that’s actually extracted via the corrosion of the zinc. “It’s sacrificial – the metal is degrading over time,” says Lovley. This means you’d have to replace the zinc – and of course the potato or plantain pith – over time.
Still, zinc is quite cheap in most developing countries. And Jayasuriya argues that it could still be more cost effective than a kerosene lamp. A zinc electrode that lasts about five months would cost about the same as a litre of kerosene, which fuels the average family home in Sri Lanka for two days. You could also use other electrodes, like magnesium or iron.
But potato advocates must surmount another problem before their idea catches on: consumer perception of potatoes. Compared with modern technologies like solar power, potatoes are perhaps less desirable as an energy source.
Gaurav Manchanda, founder of One Degree Solar, which sells micro-solar home systems in Kenya, says people buy their products for more reasons than efficiency and price. “These are all consumers at the end of the day. They need to see the value in it, not only in terms of performance, but status,” he explains. Basically, some people might not want to show off their potato battery to impress a neighbor.
Still, it cannot be denied that the potato battery idea works, and it appears cheap. Advocates of potato power will no doubt continue to keep chipping away.